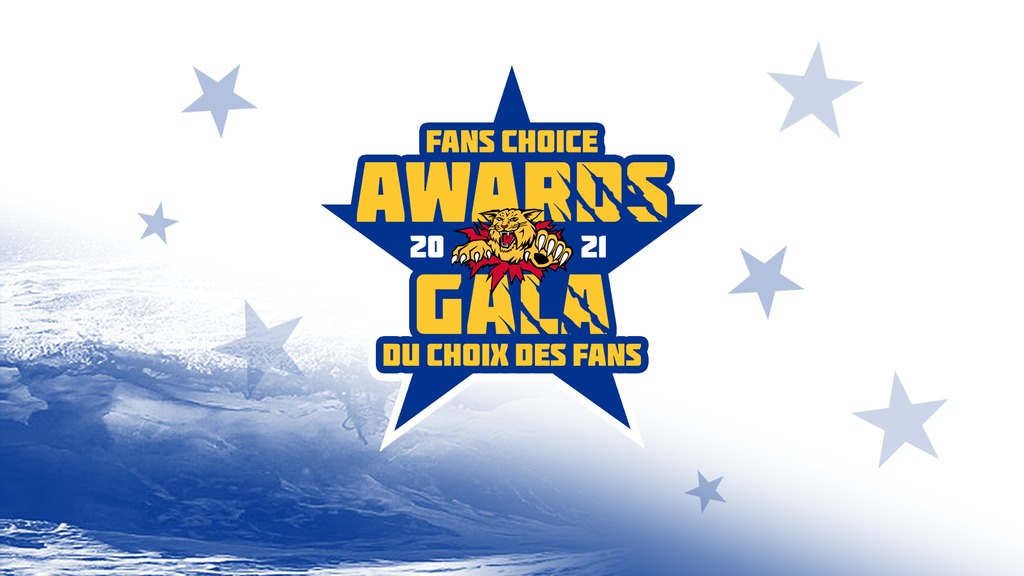 You made your voice heard last month, and now we’re ready to share our 2020-21 Fans’ Choice Awards winners! Check back daily as we reveal our award winners for the 2020-21 season!

Rookie of the Year, presented by Cansel

Alexis Daniel is this year’s Rookie of the year!

A late addition to training camp after being selected in the 11th Round at the 2020 QMJHL Draft, Daniel quickly established himself as a key member of the Wildcats this season.

Daniel suited up in 26 regular season games this year, chipping in four goals and five assists. In the playoffs, he appeared in all six games and scored three points, including a game-winning goal against Saint John.

Notably, Daniel is also the first local player to win the Rookie of the Year award since Bruce Graham in 2002-03.

Tristan DeJong is this year’s recipient of the Rebecca Schofield Community Spirit Award!
Tristan was an outstanding community leader this season through his work as a Hockey Gives Blood player ambassador, visiting schools with Reading is Wild, and so much more.

Most Improved Player, presented by Midland

As voted by our fans: Francis Langlois is our Most Improved Player this season! Francis worked tirelessly to develop and improve all aspects of his game.
He became a vocal leader in our dressing room, took on a key role killing penalties, and an important playmaker on offence!
Langlois contributed 10 goals and 16 assists across 31 regular season games this year, including a four-point night on April 11 against the Sea Dogs.

This year’s Unsung Hero is our rock between the pipes — Dakota Lund-Cornish!
Lund-Cornish was a steady and calming presence for our team this season, leading by example on and off the ice!
He is also the first goaltender to be named Unsung Hero since Bill Ruggiero in 2000-01.

Academic Player of the Year, presented by Eastern College

On the ice and in the classroom, Tristan DeJong is dependable, reliable, and consistent.

His exemplary efforts earned him both the Outstanding Defensive Player and the Academic Player of the Year honours!

Our veteran anchor on the blueline, DeJong logged the most ice time amongst defenceman for your Wildcats this year, including heavy minutes blocking shots on the penalty kill. He also lead our defense offensively, posting 14 points in 28 games.

In the classroom, DeJong excelled in his online courses as he prepares to take the next step in his academic journey next season at the University of Guelph!

With 15 goals and 17 assists in only 22 games, Captain Jacob Hudson earns recognition as Top Points Leader and Top Goal Scorer!

Hudson set career-highs in goals scored in one season, and was three points shy of matching his previous best output in overall points — in 37 fewer games. Of the 15 goals scored this year, two were gaming winning goals, two were shorthanded, and a team-high five power play goals.

No doubt about it — Captain Jacob Hudson is your winner of the Fans’ Choice Award this season! Hudson received 30% of the overall vote from our fans.

Our fans were split between two very deserving players when voting for this award, so both players will earn the distinction!

Hudson led the team in scoring with 32 points in 22 regular season games.  He elevated is play even further in the post-season, averaging two-points-per-game with 10 points in 5 games played.

Philippe Daoust had a breakout season, stepping up and taking on a much larger role with the team. He was our top playmaker this year, leading the team with 22 assists.

Daoust suited up in 21 games this season, adding six goals and 28 points, second-most on the team. He was also named Assistant Captain at the start of the year, and grew into a key leader for our young team on and off the ice.

This is only the second time in our 25-year history that two players have split the MVP recognition. The first time was in 2010-11 when twin brothers Allain and Alex Saulnier earned the award.