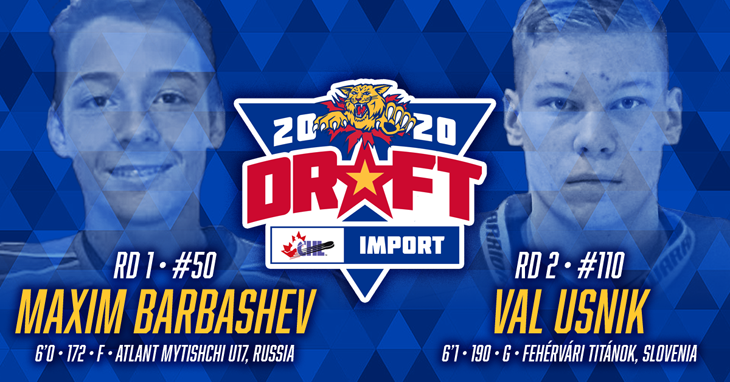 The Moncton Wildcats are proud to welcome Maxim Barbashev and Val Usnik to our organization following the 2020 CHL Import Draft.

“We’re very happy with how today went. We picked two players that we can add to our group and make us better in the short-term and the long-term,” said Director of Hockey Operations Ritchie Thibeau.

“Our first pick, Max Barbashev, he’s a power forward with skill that will come and grow with us and be a better player every year. We really like his compete and skill. He’s a guy that wants to be a hockey player and I think Moncton is a great place for him,” Thibeau added.

“Val, he’s a proven goalie at the international level. He’s a guy that can come in and add to our group, and give us solid goaltending.”

With the 50th overall pick in the 2020 CHL Import Draft, the Moncton Wildcats are proud to select Maxim Barbashev, a Russian forward with Atlant Mytishchi U17.

“I like the combination of skills and high compete level I saw in the games I’ve watched,” said Head Coach Dan Lacroix. “He’s young and eager and wants to be a hockey player. He seems committed to making that happen.”

The 6’0, 172 lbs forward tallied 19 points in 19 games with Atlant, while also serving as an assistant captain. He was called up to the U18 team, and contributed seven points across five games. In six playoff games with the U18 squad, he added another seven points.

Barbashev is the younger brother of Wildcats alumnus Ivan Barbashev.

Ivan was selected first overall by the Wildcats at the 2012 CHL Import Draft. He scored 262 points in 200 games across three seasons with Moncton — the most all-time by an import player with the franchise.

With the 110th overall pick in the 2020 CHL Import Draft, the Moncton Wildcats are proud to select Val Usnik, a Slovenian goaltender with Fehérvári Titánok of the Erste Liga.

“Val is a confident goaltender, with movement, power and recovery well above average,” said Goaltenders scout Brandon Thibeau. “He smothers everything beyond the 10 meter mark which shows great tracking. Not only getting a piece of the puck from this area but smothering them with little body movement.”

“He is a goalie that will play very well in our league.”

Usnik represented his native Slovenia this past season at the 2020 U20 World Junior Ice Hockey Championships – Division 1A, and was named the top player on his team.

Last season, the 6’1, 190 lbs goaltender earned 13 wins in 18 games with Fehérvár AV19 U18 (EBJL). He also earned six wins in eight playoff games, while posting a 1.77 goals-against-average and .947 save percentage and leading his team to the championship. 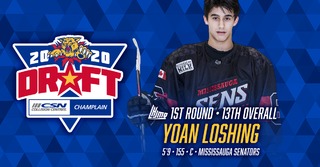