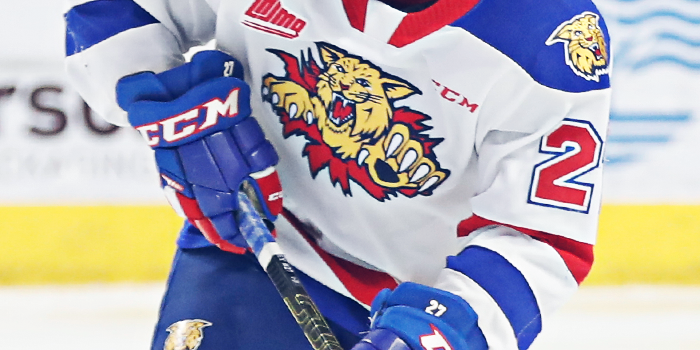 The Moncton Wildcats have extended invitations to nine free agent players ahead of training camp this fall.

Eight of the nine players invited are forwards, alongside one defenceman.

The group includes one local product from Moncton, in addition to two players from Nova Scotia. Four of the players invited originate from Ontario, and played in Junior A hockey leagues last season.

“Good size winger with good speed. He can really shoot the puck well,” said Québec Head Scout Alex Gauthier. “He has good offensive instinct and a nose for the net. And he’s the son of a former QMJHLer and NHLer [Jim Campbell] — he definitely learned competitiveness from his dad.”

Charbonneau, a 5’10, 154 lbs, forward from Val-David, QC, spent the past season with the Saint-Hyacinthe Gaulois of the QMAAA.

“He showed great progression this year. Lots of character. He’s a hard working energy player that will compete in every shift with a physical touch,” Gauthier said.

Chisholm, a 5’8, 165 lbs, forward from Lunenburg, NS, spent the past season with the South Shore Mustangs of the NSMMHL.

“He’s a smart two-way player that contributes at both ends, played all situations for his team this year, and is trusted by coaches defensivel,” said Hockey Operations Assistant Brett Turner. “He also has the hockey sense and skill to make things happen offensively.”

Labelle, a 5’9, 147 lbs, forward from Ottawa, ON, spent the past season with the Rockland Nationals of the CCHL.

“Labelle is a really good 200-foot player, he sees the ice really well,” said Québec and Ontario Scout Ismaël Bilodeau. “He’s a hard worker who can chip in offensively, and is fresh off a really good season with Rockland in the CCHL.”

“He’s always around the puck and wants to be involved in all three zones.”

Matthews, a 5’10, 161 lbs, forward from Antigonish, NS, spent the past season with the Cape Breton West Islanders of the NSMMHL.

“He is a hard working energy forward, quick skater that never stops moving his feet, goes to the dirty areas and competes hard,” Turner said. “And he doubled his production from last season to 32 points in 34 games.”

Olson, a 6’2, 181 lbs, defenceman from London, ON, spent the past season with the Pickering Panthers of the OJHL.

“He’s reliable in all three zones, really good in his own zone, and solid on his one-on-one battles,” Bilodeau said. “He has a good first pass, good IQ. Coming off a good season in the OJHL.”

Sanchez, a 5’8, 176 lbs, forward from Moncton, NB, spent the past season with the Moncton Flyers, and was called up for nine games with the Edmundston Blizzard.

“Local Moncton kid that played for the Flyers the past two seasons. Hard working forward, plays a solid two-way game and has skill,” Turner said. “He scored 17 goals this year — has the ability to contribute offensively.”

Vachon, a 6’0, 174 lbs, forward from Cochrane, ON, spent the past season with the Rayside-Balfour Canadians of the NOJHL.

“Samuel is a late bloomer from the NOJHL, a speedy, hard-working player that is going to bring a good work ethic,” Bilodeau said. “He’s a good reliable player who can do a little bit of everything on the ice.”

“A big body winger that plays an honest hard working game, reliable with a good compete level, goes to the net and the hard areas,  and he can chip in on offence,” Turner said.