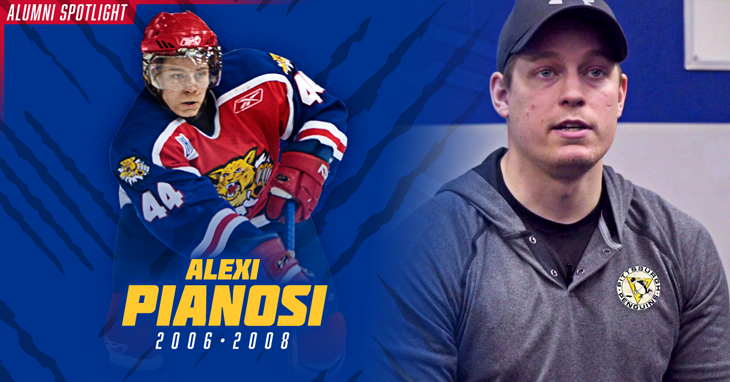 As a 17-year-old rookie in 2006, Alexi Pianosi envisioned himself one day cracking an NHL line-up.

While he didn’t end up playing in the NHL, the Moncton Wildcats alumnus is still making an impact in the league, as he is in his third season as a Strength and Conditioning Coach with the Pittsburgh Penguins.

“As much as I didn’t end up achieving that goal, getting here and getting to a great organization like Pittsburgh, working with some phenomenal athletes, some of the best players in the world, has been awesome for me,” Pianosi enthused.

Looking back on his two seasons with the Wildcats, two things immediately jump out in Pianosi’s mind: the city and the people.

“I really liked the city of Moncton. I had really good billets that I still keep in contact with — Karen and Ken Geldart,” he enthused.

“I want to give a shoutout to Karen and Ken, and say hi to them again. I loved living with them and they’re such great people. I’m just happy for all the other players that get to stay with them and have them be a part of their junior career, because they certainly made my junior career a lot better.

“I met some friends in Moncton that I’m still friends with to this day,” he added. “One’s now a doctor in Calgary, one’s a dentist in Halifax, another one is playing hockey in Europe. And to me that’s probably the best part of playing for the Wildcats.”

After completing his junior career, he continued onwards to earn a Bachelor of Science in Kinesiology and Exercise Science and play four seasons with the Queen’s Gaels at Queen’s University in Kingston, Ontario.

His interest in kinesiology first flourished during his off-seasons with the Wildcats, when he would return home to Halifax and guide younger athletes through workouts encompassing agility, sprints, and plyometrics.

In 2010, he formed his own company in Halifax called Advanced Sports Performance, and dedicated himself to it fully following his graduation from Queen’s in 2014.

“It was an opportunity to expand my business full-time and try to take that to the next level,” Pianosi explained. “It ended up working out well for me, it was a lot of work, especially off the start, but it was something I really enjoyed doing. Getting to go to the gym or the rink and work with players every day was the next best thing to being a hockey player myself.”

At the same time, Pianosi found himself on the opposite side of a Wildcats’ rivalry, when he joined the Halifax Mooseheads as their Strength and Conditioning Coach.

“I have great things to say about both Moncton and Halifax. I was treated exceptionally well,” he said. “I consider myself lucky because I got to work for the top Major Junior franchises in the country. They may be rivals on the ice but I think they’re both professional off the ice and I’m just happy I got to be a part of both of them.”

His success with his business, and working in a team environment with the Mooseheads didn’t go unnoticed, as he made the jump and joined the Pittsburgh Penguins as a Strength and Conditioning Coach ahead of the 2017-18 season.

“The Mooseheads provided a great stepping stone, that was my first time really working with a team full-time, dealing with all the players and running larger sessions,” Pianosi said. “It was a great learning experience for me and definitely helped prepare me for Pittsburgh.”

Pianosi is back in Pittsburgh now, as he helps the Penguins prepare for their return to the ice. During the down time, he helped keep players in shape and modify workout programs to suit their needs at their home environment.

“That was a challenge for staff and players alike, trying to figure out what is the endgame going to be for this,” he said. “The NHL has done a great job putting things back together and the players that I work with did a phenomenal job staying in shape over the break.”

“It certainly challenged the creative side of things as a strength coach trying to prepare everybody,” Pianosi noted. “I think our guys, based on how they’re looking on the ice, did a phenomenal job staying on top of things and getting prepared for this tournament coming up.”

Pianosi’s Penguins are set to play against the Montréal Canadiens in their play-in series. Montréal’s Strength and Conditioning coach is also a Moncton alumnus: Patrick Delisle-Houde.

While Pianosi and Delisle-Houde weren’t teammates in Moncton, their paths crossed not long after their time as Wildcats.

“I played against him a little bit in University. Queen’s and McGill has a good rivalry as well, so I knew him through that,” Pianosi explained.

“But didn’t get a chance to really get to know him until we were both working in the NHL. Patrick is a great guy, super friendly and super smart, so the Canadiens are lucky to have him,” he added.

“Obviously we have this upcoming play-in series against each other, so I’m sure he’s doing a great job preparing all the Canadiens as well.”