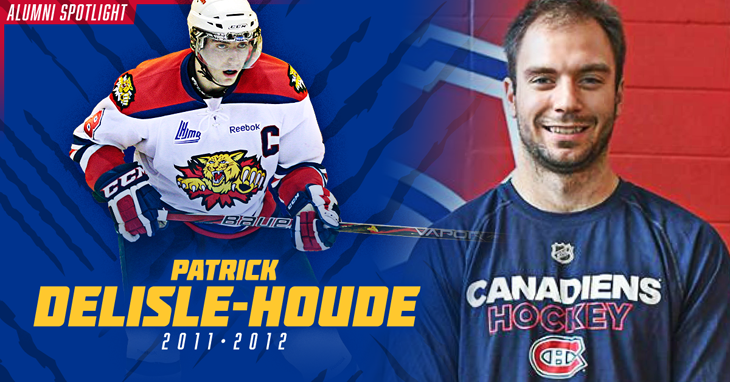 Patrick Delisle-Houde only played a single season in a Moncton Wildcats jersey, but his brief time here has made a lasting impact ever since.

Since his time in Moncton during the 2011-12 season, Delisle-Houde has earned a Bachelor of Science in Kinesiology at McGill University in 2015, then a Masters’ Degree in Kinesiology and Physical Education in 2017.

Now he’s working within his field for the Montréal Canadiens as the Strength & Conditioning Coordinator.

But none of that would have happened without a season with the Wildcats.

“Moncton is basically the reason why I realized I could go [to McGill],” Delisle-Houde recalled. “That opened doors for me.”

A forward from Québec, QC, he spent three seasons with Rimouski before a trade at the 2011 QMJHL Draft brought him to Moncton. At the time, Delisle-Houde’s abilities in English were limited.

“I met [Head Coach] Danny [Flynn] in a coffee shop two days after the draft. I’ll be honest with you, my English was so poor, I got out of there and I didn’t know what we talked about,” he admitted. “But I knew he was a genuine person and we would have a great year the following season. So that’s how it started for me in Moncton.”

“I was pretty excited for the new challenge. Moncton is a great organization and it’s well known throughout the league,” he said.

When Delisle-Houde arrived in Moncton, he was quickly paired on a line with local products Allain and Alex Saulnier at training camp.

A mid-season trade saw captain Brandon Gormley go to Shawinigan, and Delisle-Houde was appointed as his successor, becoming the 18th captain in team history.

“I was impressed by Danny’s decision, my English still wasn’t great back then, he chuckled. “I’m not the best communicator, I’m not big on speeches. However, I think I’m always going to give everything on the ice. In the room, I’m always going to be as emotional as I can be.”

He finished CEGEP during the first half of the season, then enrolled in two courses at Université de Moncton. With his English steadily improving, he realized he could continue onwards at a University like McGill, though it still wasn’t a cake walk.

“I spent most my time on Google Translate — my first semester was a real disaster,” Delisle-Houde laughed. “I picked it up slowly, and it became better afterwards.”

While at McGill, Delisle-Houde expanded on his passion for physiology.

“It’s understanding how the body works, how to improve it,” he explained.

“When I was in my undergrad, my coach back then who passed away last year, Kelly Nobes, he did his master’s degree at McGill as well, in physiology. And he was always telling me to look around, look around if I wanted to stay and pursue a master’s degree.”

Delisle-Houde was able to tailor his research towards topics that interested him most.

“I’m always wondering how the physical fitness is changing over the season,” he explained. “We picked a very simple test that was not going to affect the fatigue of a player for the remainder of the day or the week. We looked at very simple physiological parameters and their body composition.

“We found that men are not getting in the best shape that they can at training camp but it changes over the first half of the season, they’re improving. Then the second half they’re decreasing slightly, because obviously the overload, they’re getting a little tired, they’re coming back from Christmas break then into playoffs, it’s a long season,” he added.

“So, it was super interesting for me to have the opportunity to investigate myself.”

While working towards his master’s at McGill, Delisle-Houde also began volunteering with the Canadiens, such as assisting with fitness testing.

“Just learning what they are doing, how they are doing it, why they are doing it. And it was quite funny, at the end of the season they were like, were creating a sports science department and we’d like you to be on board,” he said. “It was the perfect timing.”

Delisle-Houde immediately joined the Canadiens after graduating in 2017, and has been with the team ever since.

With the NHL on pause due to the COVID-19 pandemic, Delisle-Houde has been busy ensuring the players are in-shape and prepared for a return.

“I designed training programs for the guys,” he explained. “I was making sure they’re all training with the equipment they have at home. Some of them have really nice gyms, some have basically nothing. Bodyweight, using stairs, or the park when it was available and safe.”

While his time in Moncton was quick, Delisle-Houde hasn’t forgotten about the place or the people that played a small role in him becoming who he is today.

“I met great people in Moncton, and people I still talk with today, especially my billets,” he enthused.

“That’s when you realize where you go — that’s a good part of junior hockey, wherever you go you meet people and people that love hockey, love sports. And you develop friendships around it.”