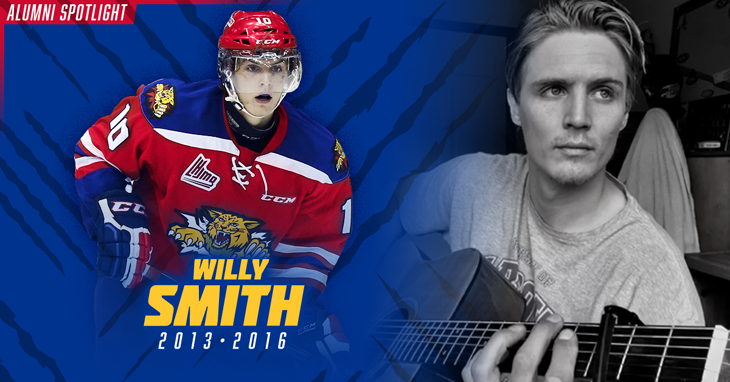 When he was a 17-year-old rookie with the Moncton Wildcats in 2013, Willy Smith decided to take his passion for music and share some of his creations online.

Flash-forward to today, Smith has found the perfect balance between a career in professional hockey and music.

“They’re almost opposite things. For example, today I have a lot of music projects I could work on, and I do for a couple hours. Then I need a break from that, because it gets exhausting. So I’ll take my rollerblades out and stickhandle in the garage or skate up the street. That’s the biggest release from anything, they balance each other out.

Smith spent three seasons in Moncton from 2013-16, playing in 193 regular season games, and scoring 85 points. More importantly, he gained a number of friends and memories along the way.

“My teammates — we had so much fun,” he recalled. “It was an experience I never could have imagined, and still when I look back on it — I still can’t believe it happened. I feel so privileged to be in that position.”

After his time in junior hockey wrapped up, Smith pursued a career in professional hockey. He attended training camp with the Indy Fuel of the ECHL in 2017 and turned a Professional Tryout Offer into a contract.

“I made the team out of camp. I was pretty excited about that. I stayed for about a month and a half, then I got a dose of reality a little bit,” Smith explained.

With an influx of players of players with contracts from affiliate teams in the NHL and AHL, Smith slid down the depth chart until he was released altogether in November 2017.

Smith was encouraged to continue with the Peoria Rivermen, a nearby team in the Southern Professional Hockey League (SPHL). With Smith in close proximity to Indy should they ever need to add a player, it could improve his chances of a return to the ECHL.

“I showed up in Peoria, and it took me another month and a half to get over myself, swallow my pride, and have fun with it,” he said. “Because I wasn’t happy being there. I wanted to be in the ECHL, and keep going up from there. So having to take a step back there first in order to do that was a hard pill to swallow.”

Smith benefited from the renewed outlook on hockey; he scored 33 points in 39 games in his rookie season.

Off the ice, Smith also started producing music again after taking a break over the past two years. His teammates found his music online and played it in the dressing room one day.

When he got home and pulled up his old content, he was surprised to discover one song in particular had been played over 300,000 times.

“This has always been a hobby of mine. If I’m at home hanging out, I can hop on a computer and make a beat or a song,” Smith said.

Another strong season in the SPHL helped Smith get some more looks at the ECHL level. This past season, he established himself as a regular in the ECHL, playing in 44 games with the Wheeling Nailers.

“This past summer, I started playing a lot more guitar. I wanted to do gigs this summer, and over the course of last season in Wheeling I started learning songs,” Smith said.

“I would play guitar for the guys, we’d come home and sing songs. Since the quarantine, I started doing this thing where I release a cover song every Sunday. People really enjoyed it so I’ve been rolling with that right now.”

Smith’s talent caught the attention of some local musicians that have a studio nearby his home in the summertime.

“They told me I can come in and record some songs. What I was doing was remixes to songs that were already created,” Smith explained. “Or going on my computer and making a beat and I just have hundreds of files with beats on my computer. It’s like an impulsive thing when I’m bored and make one.”

Asked how many songs Smith had written featuring himself and a guitar, he estimated he only had one or two. So the musicians encouraged Smith to create more and follow-up when he was ready to record them in their studio.

“That’s the project I’m working on right now,” he enthused. “Over the past four months I’ve been writing four songs, and I’m going to record a short EP. Just me and the guitar.

“And I’ll release that hopefully in the fall. And continue with the weekly covers,” he added.

“I’m releasing a cover every Sunday, it’s just me and the guitar singing. Eventually when things come out, when projects come to fruition, I’ll be notifying people there,” Smith said.