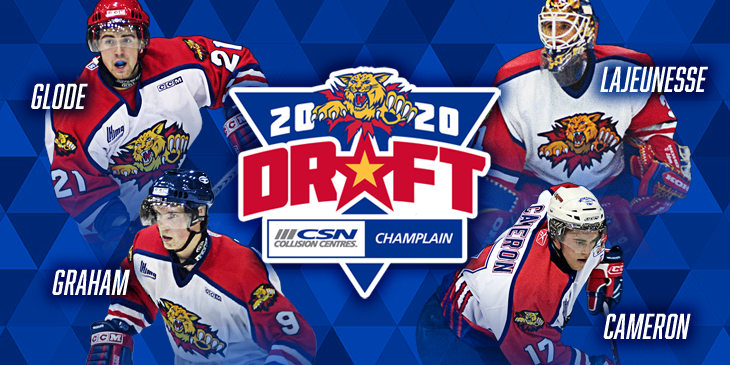 Following yesterday’s trade activity, the Moncton Wildcats now enter the 2020 QMJHL Entry Draft with 11 draft picks, and will first be on the clock in the third round, 41st overall. Here’s a look at some of the most memorable 3rd round picks in our 25-year history:

Many of the best goaltenders in franchise history began as Moncton Wildcats draft picks. In 1997, Simon Lajeunesse was added to a crease that already featured first round pick Jean-François Damphousse.

After apprenticing under Damphousse for his rookie season, the duo split the crease in 1998-99, before Lajeunesse took over the reigns as the full-time starter in 1999-2000. He was between the pipes for the Wildcats’ first deep playoff run in team history. Lajeunesse would establish a team record 31 wins in the regular season, then won nine playoff games as the Wildcats reached the conference finals.

Lajeunesse went on to play a single game in the NHL with the Ottawa Senators, and several more seasons across the AHL and ECHL.

In 2001, the Wildcats drafted local forward Bruce Graham in the 3rd round. Graham played in three games during the 2001-02 season, getting his first taste of QMJHL hockey before becoming a regular the following season.

Graham had a breakout year in 2003-04, ranking fourth in team scoring during the regular season with 24 goals and 33 assists while playing in 68 games. His play & size attracted the attention of NHL scouts, and he was chosen in the 2nd round, 51st overall, by the New York Rangers in the 2004 NHL Entry Draft.

After four seasons with the Wildcats, Graham went on to a lengthy professional hockey career in North America and Europe. Most notably, he won league championships with the Nottingham Panthers (EIHL, 2012-13) and Allen Americans (CHL, 2013-14).

Just four selections after Graham, the Wildcats selected Kevin Glode 46th overall. Glode made the Wildcats roster as a regular in 2001-02, scoring 14 points in 70 games as a rookie.

He spent all four seasons of his QMJHL career with the Wildcats, tallying 128 points across 243 regular season and playoff games.

After graduating from the Wildcats, Glode enrolled in the criminology program at the University of Ottawa, while also playing four seasons with the Ottawa Gee-Gees men’s hockey team. He scored 22 points in 24 games as a rookie in 2005-06, and was named to the league’s all-rookie team.

Fresh off a spectacular season with the Summerside Western Capitals, Randy Cameron was chosen 39th overall with the Wildcats. He joined the rebuilding team in 2006-07, and scored 39 points in 70 games.

Cameron’s best season in a Wildcats jersey was in 2009-10, when he scored a career high 68 points in 68 games. He added 21 points in 21 games in the QMJHL playoffs, including a goal and an assist in Game 6 of the President Cup final to help clinch the championship on home ice.

Cameron was also an NHL draft pick, with the Detroit Red Wings taking him in the 5th Round, 148th overall in the 2007 NHL Entry Draft.