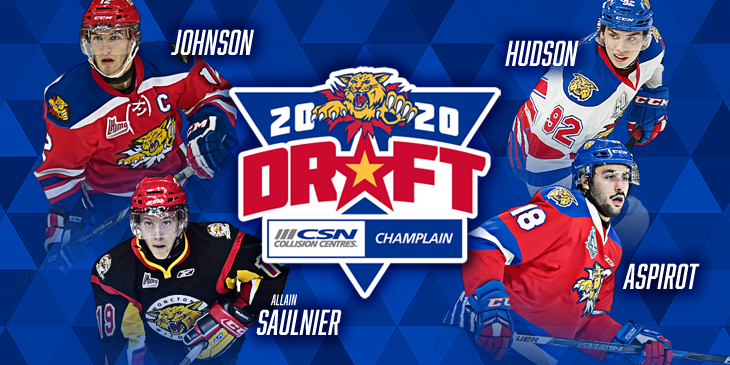 The Wildcats drafted Moncton Flyers forward Allain Saulnier in the fourth round of the draft, just one round before selecting his twin brother Alex. Like Alex, Allain Saulnier was fresh off a strong offensive season with the Flyers. He led his midget league in scoring, with 85 points in 35 games in the regular season, then another 18 points in eight playoff games.

Saulnier debuted alongside his twin brother with the Wildcats that fall, and developed into a regular contributor. He played in all 21 playoff games, helping Moncton win the President Cup in his rookie season.

Saulnier played all 295 games of his QMJHL career in a Wildcats jersey, and co-captained the Wildcats in his final season alongside his brother. He then went on to play four seasons at Université de Moncton, and led the entire country with 35 assists in 30 regular season games.

The Wildcats found another Moncton Flyer that would develop into a captain in 2012 when they selected Stephen Johnson. Johnson joined the Wildcats that fall, scoring 10 points in 53 games as a rookie.

In each subsequent season, Johnson broke through with a new career-high in points in the regular season. In 2014-15, Johnson was named co-captain alongside Taylor Burke, then continued forward as the sole captain for another season in 2015-16.

Since completing his junior career in Moncton, Johnson has continued to find success at the university level. He established a career-high 19 goals and 18 assists in 30 games with the Saint Mary’s Huskies in the AUS this past season. Johnson also contributed a goal and an assist with the U Sports All-Star team that competed against World Junior hopefuls back in December.

In 2015, the Wildcats found another future captain in the fourth round, when they selected forward Jonathan Aspirot.

Aspirot debuted with the rebuilding Wildcats in 2016-17, notching three goals and nine assists in 64 regular season games. The following season, Aspirot transitioned to defence and contributed 26 points, second most among defenders behind captain Nick Welsh. A leader by example on and off the ice, Aspirot became captain as a 19-year-old ahead of the 2018-19 season.

By the end of the season, his play had attracted the attention of the Ottawa Senators, earning him a contract with AHL Belleville. Following a successful rookie campaign this past year, Aspirot signed a three-year entry level contract with Ottawa back in April.

After the draft, Hudson spent the 2016-17 season with the Cape Breton West Islanders, ranking second in team scoring during the regular season with 45 points in 35 games. He faced-off against future Wildcat Jakob Pelletier in the Telus Cup Final, and was named tournament MVP after the win.

Hudson has now become a fan favourite, and most recently wrapped his third season with the Wildcats, scoring 22 points in 63 games, while also serving as an assistant captain.