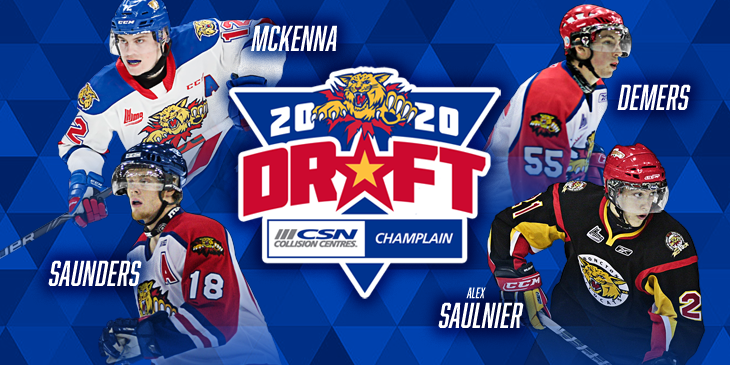 The Moncton Wildcats found a number of key players in the 2001 QMJHL Entry Draft, including Nathan Saunders, a tough defenceman from Charlottetown.

Saunders played all four seasons of his QMJHL career with the Wildcats, and recorded a franchise record 794 penalty minutes in the regular season. He also went on to become the captain of the team in his final year in 2004-05.

After graduating from the Wildcats, Saunders went on to play professional hockey for several seasons. He played over 100 games in the ECHL, and over 50 games in the AHL with Portland and Providence.

In 2004, the Wildcats selected defenceman Jason Demers from the Lac St-Louis Tigres Espoir. At the time, the Wildcats were nearing contender status, and Demers cracked the roster at 16-years-old, dressing in 25 games and chipping in an assist. The following season, Demers was packaged in a trade to Victoriaville to bring in goaltender Josh Tordjman, who went on to backstop the Wildcats to a President Cup and an appearance at the Memorial Cup final.

Since his time in the QMJHL, Demers has been a steady defender at the NHL level. He’s played in over 700 NHL games to date, and currently plays for the Arizona Coyotes alongside fellow Wildcats alumnus Conor Garland.

In 2009, the Wildcats snagged Moncton Flyers forward Alex Saulnier in the fifth round of the draft, just one round after selecting his twin brother Allain. Saulnier was fresh off a stellar season with the Flyers, scoring 80 points in 35 games in the regular season, then another 23 points in eight playoff games.

Saulnier debuted with the Wildcats that fall, and developed into a regular contributor. He played in all 21 playoff games, helping Moncton win the President Cup in his rookie season.

Saulnier played all 281 games of his QMJHL career in a Wildcats jersey, and captained the Wildcats in his final season. He then went on to play four seasons at Université de Moncton, where he was recognized as an AUS All-Star on two occassions.

Fan favourite Jeremy McKenna was another Wildcat selected in the 5th round of the Draft. After a season developing in Austria, McKenna joined the Wildcats full-time in 2016-17.

Wildcats fans can continue to follow McKenna next season, as he makes the jump to professional hockey with the Toronto Marlies in the AHL.