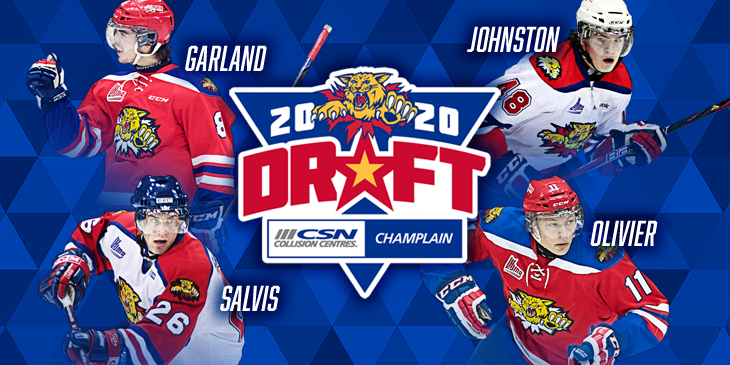 The Moncton Wildcats are currently set to enter the 2020 QMJHL Entry Draft with ten draft picks — eight of them in the 8th Round and later. In the 6th round, the Wildcats will pick 111th overall. Here’s a look at some of the most memorable 6th and 7th round picks in our 25-year history:

Armed with 18 draft picks at the 2001 QMJHL Entry Draft, the Wildcats drafted several players impactful players over the course of the day. In the 6th round, the Wildcats selected local product Ryan Salvis.

Salvis made the jump to the Wildcats that fall, dressing in 53 games for the rebuilding Wildcats. Over four seasons, Salvis tallied 87 points in 207 career games — all with Moncton.

Since his time with the Wildcats, Salvis went on to play three seasons with the St. Francis Xavier X-Men, before embarking on a professional hockey career that included five seasons in the SPHL. In 2017-18, he won an MHL Championship as head coach of the Edmundston Blizzard. This past season, Salvis returned to Moncton, joining the Wildcats as an assistant coach.

Ross Johnston is another late round pick that immediately jumped into the Moncton Wildcats line-up.

As a rookie in the 2011-12 season, Johnston played in 38 games, recording seven points. In his sophomore season, Johnston’s contributions increased — he record 27 points over 53 games.

Following two more seasons in the QMJHL with Victoriaville and Charlottetown, Johnston earned himself a contract with the New York Islanders as an undrafted free agent.

Now in his second season as a full-time NHLer with the Islanders, Johnston played in 32 games during the 2019-20 regular season.

Conor Garland, the all-time leading scorer in Moncton Wildcats history, was a draft day steal selected in the 6th Round. When Garland committed to the team later in December 2012, Danny Flynn said, “He has the potential to develop into a very good offensive player for the Wildcats down the road.”

Garland certainly lived up to his potential during his time with the Wildcats. Over the course of four seasons, he scored 328 points in just 208 regular season games, and led the entire CHL in scoring over the course of back-to-back seasons (2014-15, 2015-16).

His offensive prowess has carried forward into the professional ranks. Garland scored 22 goals and 17 assists this past season with the Arizona Coyotes.

In 2013, the Wildcats selected forward Mathieu Olivier from the Lévis Commandeurs. Olivier made his Wildcats debut that fall as a 16-year-old, and scored 14 points as a rookie in 2013-14.

He added another seven points in 33 games before a mid-season trade sent him to Shawinigan. Over the course of five seasons, Olivier developed into a reliable contributor, notching 130 points in 300 career games in the QMJHL.

Olivier is another example of a late round pick that has worked his way into the NHL. He became the most recent Wildcats alumnus to debut in the NHL when he was called up by the Nashville Predators in November 2019.