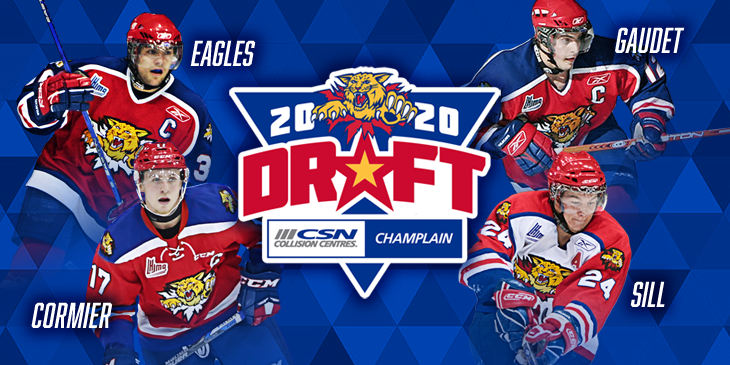 The Moncton Wildcats are currently set to enter the 2020 QMJHL Entry Draft with ten draft picks — eight of them in the 8th Round and later. In past years, the Wildcats have found a number of key contributors in the later stages of the draft, including some future leaders of the team. Here’s a look at some of the most memorable late round picks in our 25-year history:

Christian Gaudet was passed over in his first year of eligibility for the draft in 2002, before the Wildcats scooped the local product in the 11th round of the 2003 draft. With a focus on shutting down the opposition and defensive play, he was able to crack the line-up that fall at 17-years-old.

Gaudet went on to play four seasons in the QMJHL, with all 258 games in a Wildcats uniform. He captained the team for two seasons, starting in 2005-06, where the Wildcats would go on to win the President Cup for the first time in team history.

In 2005, the Wildcats lacked a number of early round picks, but found a pair of key contributors in the later rounds. Zach Sill was selected 146th overall, and joined the Wildcats in 2007. He scored 18 goals as a rookie in 2007-08, and was an assistant captain during both his seasons here.

Since graduating from the Wildcats in 2009, Sill has found success at the professional level. He played 93 NHL games split across Pittsburgh, Toronto, and Washington, and nearly 500 games at the AHL level. Sill is currently signed with Kölner Haie in Germany for the 2020-21 season.

Just one round after selecting Sill, the Wildcats chose Matt Eagles in the 9th round. Of the 13 players selected in 2005, Eagles was the only prospect to immediately join the team full-time in 2005-06.

In his rookie season, he won the President Cup with the Wildcats. Eagles became the Wildcats captain ahead of the 2008-09 season, and went on to score a career-high 65 points.

In 2013, the Wildcats found another future leader late in the draft. Cormier was tabbed 141st overall, and made the jump to the Wildcats at 17-years-old following another season in major midget.

He played with a physical edge and chipped in key goals, endearing himself to Wildcats fans. As a 19-year-old, he was named captain of the Wildcats ahead of the 2016-17 season.