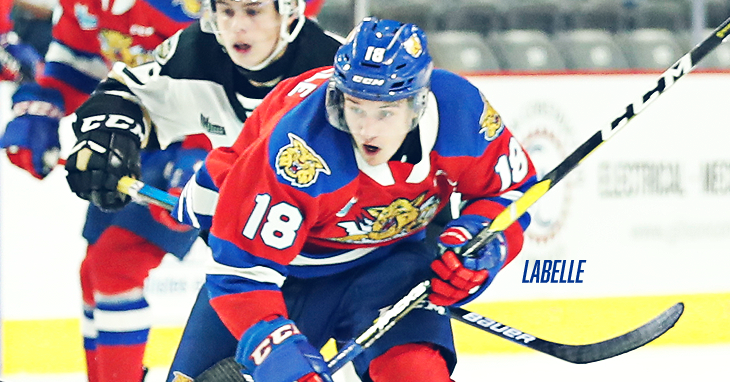 Vinnie Labelle scored both goals for the Wildcats in a 4-2 loss to the Charlottetown Islanders on the opening night of the 2020-2021 QMJHL season, Friday at Avenir Centre.

The 18-year-old free-agent signing scored his first QMJHL goal five-and-a-half minutes into the game by banking the puck off Islanders’ goalie Colten Ellis and into the net with a shot from behind the goal line. Mathis Clouthier earned an assist for his first Wildcats’ point while Connor Olson also had a helper for his first career point.

Labelle struck again on the power play more than three minutes later, depositing the rebound of a point shot from Jordan Spence. First-round draft pick Yoan Loshing picked up a helper on the goal for his first QMJHL point.

The Islanders cut their deficit in half before the end of the period and tied the game midway through the second.

Sainte-Marie-de-Kent’s Lukas Cormier netted the eventual game winner with under seven minutes to play in the third period and added an assist on the final goal of the game, a Charlottetown power play strike just over a minute later.

Moncton goalie Dakota Lund-Cornish made 24 saves in the loss.