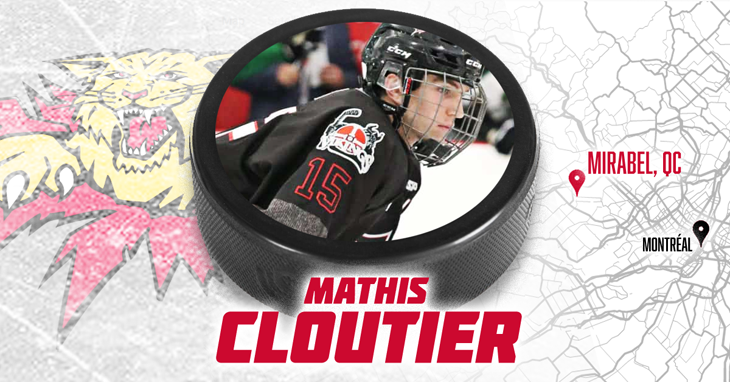 Acquired via trade at the 2020 QMJHL Entry Draft, prospect Mathis Cloutier is ready to hit the ground running when he arrives in Moncton later this year.

“I’m excited … I’ve seen some pictures and videos [of the Avenir Centre], it’s awesome,” he enthused. “I know some of the players that have played there. I can’t wait to discover more about Moncton.”

Cloutier, a forward from Mirabel, QC, is fresh off a breakout season, where he led his team in scoring with 55 points in 39 games with the Saint-Eustache Vikings (QMAAA), and tied for first in league scoring.

“We had a lot of highs and lows during the season,” he recalled. “This year the competition was really intense in the league. If you lose three games in a row, you can really go down in the standings, but if you win three then you go high.

“We finished a little bit lower than we thought. But in the playoffs, we won the first round,” he said. “The second round, like everyone knows, the season ended and we don’t know what would have happened next.”

Beyond offensive metrics, Cloutier was most proud of his improvements as a two-way player over the course of the season.

“Last year, I think my leadership improved, I trusted myself more last year,” he explained. “I played good offensively when you look at the stats.

“But I think defensively I played well; I took big faceoffs at big moments in the defensive zone. I can play on both sides of the ice, and I’m really proud of that.”

He was also called up by the Val-D’Or Foreurs during the season, appearing in 13 games and scoring four points.

“Honestly, I was really lucky. I didn’t know a lot of players in Midget AAA that had the chance to play that many games,” Cloutier enthused.

“Each time I went up with Val-D’Or, it was a great experience. I learned a lot.”

Of his 13 games in the Q, four of them came against top prospect Alexis Lafrenière and the Rimouski Oceanic.

“When you meet and play against bigger, better players — like Lafrenière — players that are going to be drafted into the NHL, each time you learn something,” Cloutier explained. “And I’m really excited to become a full-time player.”

This summer, Cloutier has been singularly focused on training and preparing for his debut season with the Wildcats.

“It’s going well. The gyms are open now. Since four or five weeks ago I’ve been back training in the gyms,’ he explained.

“I stared to skate two weeks ago. I’m really happy to be back on a solid routine. It’s been a long time since I’ve been on the ice, I don’t remember a break that long in my life,” he laughed.

“I’m really happy to join a first-class organization like the Moncton Wildcats. I can’t wait to start.”

Last night we caught up with Mathis Cloutier after acquiring him from the Val-d’Or Foreurs!