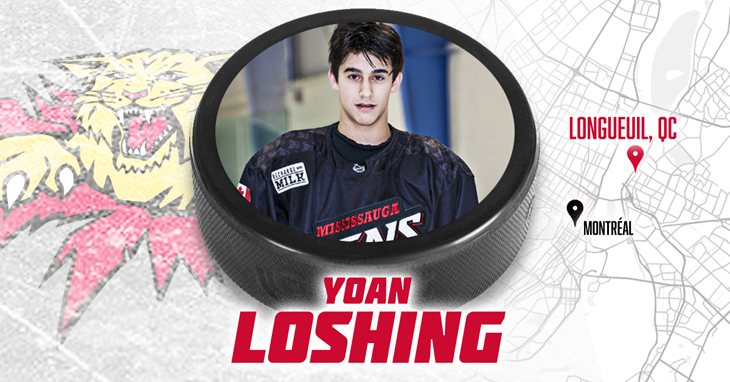 “I’m doing very well. During the quarantine, I’ve been training in the mornings then afterwards I like to spend time with my family or go fishing with my friends,” the 16-year-old said in an interview recently. “I’m training to be ready for camp right now, and started skating on the ice about four weeks ago.”

“I’ve heard the city of Moncton is an incredible hockey town; I can’t wait to see the city and meet all the fans,” he said.

Loshing was the top pick for the Wildcats at the 2020 QMJHL Entry Draft, selected 13th overall following a pair of trades on draft night. He’s a two-way skater that brings offensive potential and plenty of speed.

“He’s very dynamic, he’s always moving on the ice,” said Head Scout Alex Gauthier following the draft. “Obviously we’re going to have a younger roster this year, so he’s definitely a guy that will be right there, should win his spot offensively. I think he can bring offence as soon as next year for sure.”

Welcome to Moncton, Yoan!@yoanloshing joins us to discuss his 2020 Draft experience, his style of play on the ice, and much more!

The forward from Longueuil, QC, led his team in scoring with 36 points in 28 games with the Mississauga Senators (GTHL U16). His 24 goals during the season also tied for most in the league by a single player.

While the individual statistics look great, they’re no where near the forefront of Loshing’s mind.

“My first goal was to help my team get as far as possible during the season. I also wanted to gain more confidence within my game,” he stressed.

The jump to Mississauga benefited Loshing for a number of reasons. It gave him the opportunity to play against a higher level of competition on the ice, and off the ice, he would have a greater opportunity to practice his English skills.

“I loved my time in Mississauga, it was an incredible experience,” Loshing enthused. “I grew as a player and a person, and learned to play a different style of game.”

Update: On July 22, Loshing officially signed with the Wildcats

Check out some of Yoan Loshing’s highlights from the past season below.