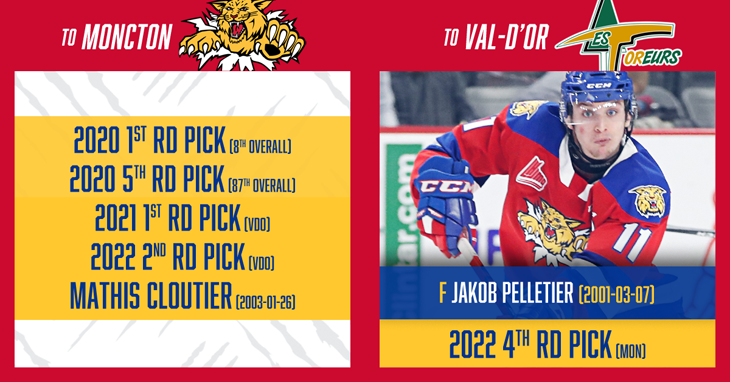 The Moncton Wildcats opened the 2020 QMJHL Entry Draft with a major splash, acquiring the 13th overall pick and multiple other assets in a series of trades with the Val-d’Or Foreurs and Gatineau Olympiques.

First, the Wildcats acquired a package centred around the 8th overall pick in exchange for captain Jakob Pelletier and a 4th Round draft pick in 2022.

Cloutier was selected in the 4th Round, 60th overall at the 2019 QMJHL Entry Draft. He appeared in 13 games for the Foreurs, scoring a goal and three assists. Cloutier spent the majority of his season with the Saint-Eustache Vikings (QMAAA). The centreman ranked second in league scoring, with 55 points in 39 games, and served as an assistant captain. 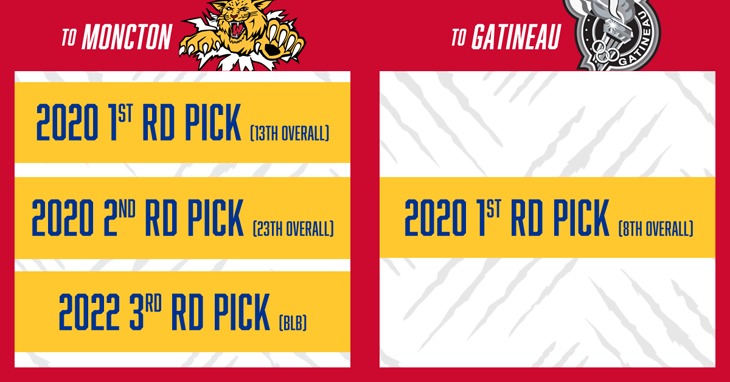 Selected 3rd overall at the 2017 QMJHL Entry Draft, Jakob Pelletier was an impact player from the moment he stepped on the ice in a Moncton Wildcats uniform. In 199 career regular season and playoff games with the Wildcats, Pelletier was an offensive force, scoring 240 points. In just three seasons, Pelletier ranks 8th all-time in career points with Moncton. Ahead of the 2019-20 season, Pelletier became the 28th captain in team history.

The Moncton Wildcats would like to thank Jakob for everything he has done for the organization and wish him nothing but the best throughout the remainder of his QMJHL career and beyond.