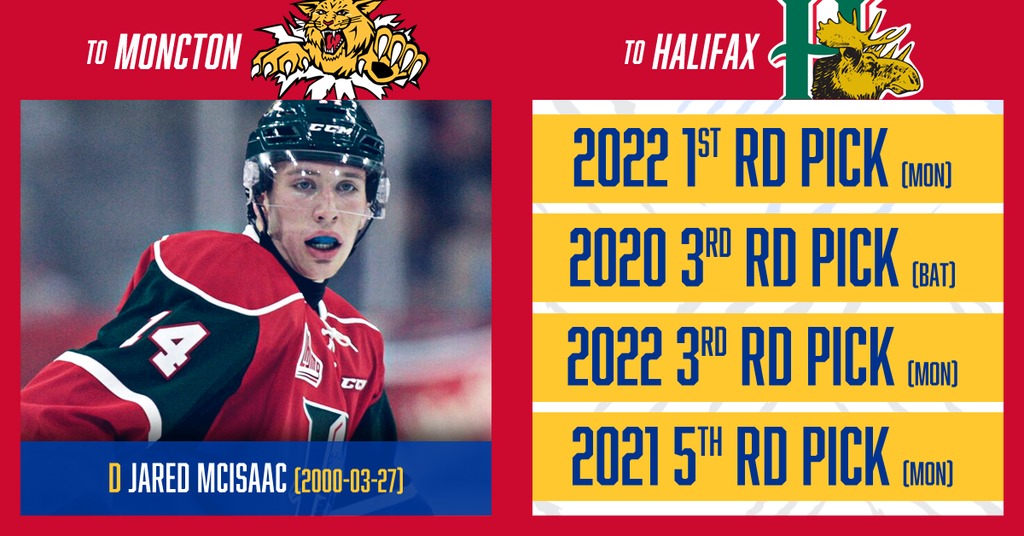 Jared will join the Wildcats after spending four seasons with the Mooseheads. Born in Truro NS, McIsaac was drafted second overall in the 2016 QMJHL Entry Draft and played in his home province for 180 regular season games, registering 29 goals and 114 assists for a total of 143 points to date.

During his first season in the QMJHL he was named defensive rookie of the year, and has continued to impress since then. Last season he was part of the Mooseheads roster for their Memorial Cup run, and although did not have the outcome they wanted, McIsaac had an outstanding season. Suffering from a shoulder injury at the time, he was still able to finish the regular season second among all defenseman in scoring with 62 points in 53 games and was named to the QMJHL Second All-Star Team.

Jared missed the first half of this season in Halifax recovering from shoulder surgery and returned to the lineup just before the Christmas break playing three games.

He was most recently on the ice as part of team Canada at the 2019 World Junior Hockey Championship in Ostrava, Czech Republic taking home the gold medal in yesterday’s game.

“We are very excited to add world caliber defenseman to our group, said Director of Hockey Operations, Ritchie Thibeau. “Jared is a proven playoff performer and with both international and Memorial Cup experience he will be a  valuable asset to our blueline.”

Drafted by the Detroit Red Wings in 2018, 36th overall, the 19-year-old will bring a veteran presence and solidify the blueline, he is a shutdown defender who can play at both ends of the ice and we look forward to welcoming him to Moncton.