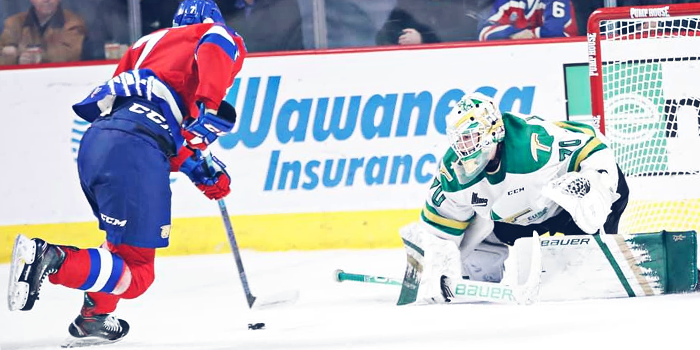 The Wildcats have won three straight games and 18 of their last 21 following a 4-1 triumph over the Val-d’Or Foreurs, Thursday at Avenir Centre.

Rumsey, back in the lineup after missing four straight games due to injury, scored the only goal of the first period midway through to give the Wildcats a 1-0 lead after one.

Desnoyers made it 2-0 with under eight minutes left in the second period.

More than four minutes later, Foreman extended the lead to 3-0. Francis Langlois earned an assist on the goal for his first QMJHL point.

The Foreurs buried a power play goal with one minute left in the period, making Moncton’s lead 3-1 after forty minutes.

Val-d’Or appeared to score again early in the third period, but the goal was overturned because the visitors were offside when they entered the Moncton zone.

Pelletier capped the Wildcats’ win with a 4-on-3 power play goal with under five minutes to play.

Goalie Olivier Rodrigue turned aside 29 shots for the win. His counterpart, Val-d’Or’s Jonathan Lemieux, made 53 saves in a losing cause.