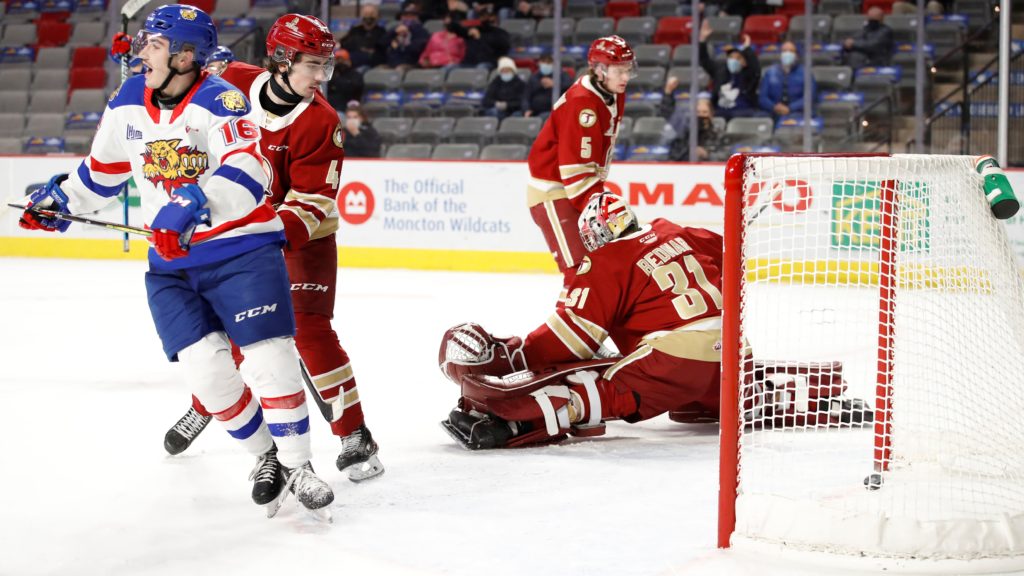 Jacob Hudson scored twice, including the eventual game-winner, as the Wildcats came from behind to defeat the Acadie-Bathurst Titan, 5-3, Tuesday at Avenir Centre.

Connor Richard finished the night with a goal and an assist while Thomas Darcy and Maxim Barbashev also scored. Jacob Stewart chipped in with two assists.

The Titan opened the scoring twelve minutes into the game.

Hudson’s first of the night tied the game with about one minute remaining in the period.

Goalie Dakota Lund-Cornish fired a long pass to Hudson at the Acadie-Bathurst blueline. The Moncton captain raced into the left circle and ripped a wrist shot past the glove of goalie Jan Bednar.

Darcy gave the Wildcats their first lead more than seven minutes into the second, finishing off the rebound of an Alexis Daniel shot from the low slot.

But the Titan responded a short time later with a pair of power play goals – one on a two-man advantage – 16 seconds apart, giving the visitors a 3-2 lead.

Richard tied the score with five minutes left in the period, pouncing on the rebound of a Stewart shot from the left side.

It was a 3-3 game through forty minutes.

Richard tried a wraparound from behind the net and the puck eventually went to Owen Stammer off the right side of the crease. He fed Hudson, who poked the disk just across the goal line. Video review was required to confirm the goal.

The Russian forward, back in the lineup after missing eight games due to injury, parked himself off the right side of the crease, took a pass from behind the net and snapped a low shot inside the right post.

Lund-Cornish earned the win and second stars honours with 23 saves and an assist.