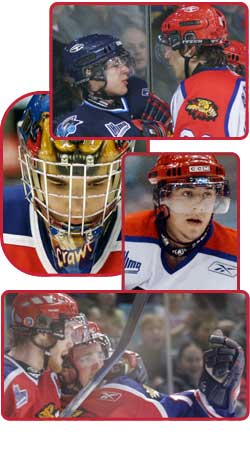 The Wildcats started year nine as the team to beat in the QMJHL. With a squad of returning veterans and some key rookie additions, Moncton came out of the starting gate on fire.  They lead the league and were consistently ranked in the top 10 of the CHL up to the Christmas break.

Disaster struck in early January when Karsums injured his ankle in a freak accident in Bathurst and centre Bruce Graham suffered a broken leg.  Both key players were lost to the Wildcats for almost all of the rest of the season.

In January, the Wildcats hit the skids with a 3-8-1 slump.  They were still second in league standings but on a five game losing streak. Following a humiliating loss in Rimouski, owner Robert Irving, fired head coach Christian La Rue, who had signed a three year contract the previous summer.  Assistant coach Daniel Lacroix took over behind the bench and former Moncton Hawks star Pierre Rioux was brought in as an assistant.

In his second year as an assistant coach, Lacroix found himself with a number of problems. “It was a tough situation.  The team wasn’t going very well, after such a strong start.  Players were going to the World Juniors, then there were some key injuries and that really took its toll.  There’s a type of chemistry that comes from being a winning team and for a while we were a below .500 team but in the last month we came back to an even wins and losses. We made the trade at Christmas and that was a very difficult move. We had overage guys who had grown up in the Wildcats organization, Ryan Salvis and Luke Pelham Kevin Glode and Corey Crawford. To have to pick three from that group was a tough, tough decision. Going into the playoffs, we had great leadership with guys like Saunders, Bernier and Glode. These guys battled hard even with the tough times when we had a very thin line-up, with Francois Caron going down with an injury that really hurt the team. Early in the season we had a schedule that was in our favor with a lot of home games but in the second half we were on the road more,” Lacroix said.

Going to post season play, Lacroix knew it wasn’t going to be an easy run. “We faced Drummondville in the first round of the playoffs, an up and coming team who consistently beat the top teams in the league after Christmas.  The first round was a big challenge, we had injuries and they were young and hungry, they gave us a good run which could have gone one way or the other.  I thought our calmness and maturity prevailed and our key players stepped up to the plate and that was the difference in the series.” The Wildcats won the series 4 games to 2.

Moncton faced the Rouyn-Noranda Huskies in series two. Lacroix well remembers the series. “We faced a team with a lot more speed, they were aggressive and rested.  We had guys banged up from the first series.  That’s when our depth could have really helped us, Martins Karsums didn’t play and that hurt. Their goaltender played well throughout the series.  We lead at key times during some of the games but gave up goals to a very potent offence and just didn’t have enough to hold on,” Lacroix said.

Corey Crawford had an outstanding season in the Moncton net setting a record with a 2.47 goals against average and equaled the record for most shutouts in a season with 6.  Crawford also backstopped the Wildcats to another record, fewest goals against with 175 over the 70 game regular season. 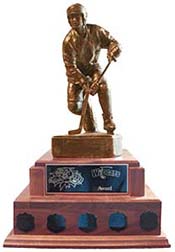