The Wildcats scored four times in the first period on their way to a 10-2 victory over the Saint John Sea Dogs, Wednesday at Avenir Centre.

Moncton had three goals in the first nine minutes – two from captain Jakob Pelletier and one from Zachary L’Heureux – to snare a quick 3-0 lead.

That prompted a goaltending change for the Sea Dogs, but Jeremy McKenna struck with seven minutes left in the period and Moncton led 4-0 after twenty minutes.

Mika Cyr, L’Heureux and Alexander Khovanov added to the offensive onslaught in the second period, with the Wildcats carrying a 7-2 lead through two periods.

Gabriel Fortier netted a pair early in the third, sandwiched around Khovanov’s second of the game, creating the 10-2 final score. 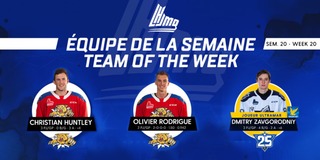